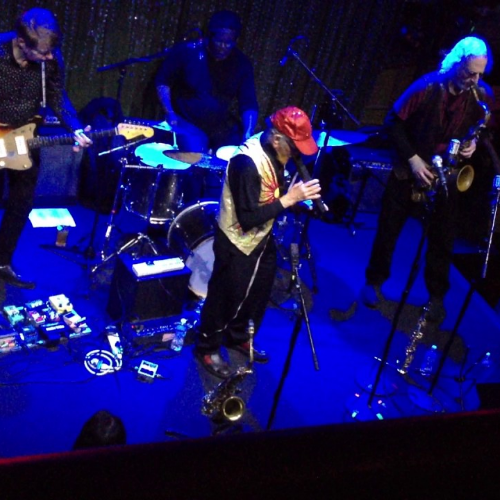 COW HAUS PRODUCTIONS AND FIFTH & THOMAS PRESENT: THE NELS CLINE – LARRY OCHS – GERALD CLEAVER TRIO come to Tallahassee in support of their debut album “What Is To Be Done”, on Clean Feed Records, along with local support TBD! Doors: 8:00pm | Show: 9:00pm | Ages 21+ Only

Tickets are $20 in advance and $25 the day of the show, before tax and fees. No refunds or exchanges of ticket purchases. Advance tickets will also be on sale in person with NO FEES at Finnegan’s Wake Irish Pub.

This incredible trio was created by Detroit native and internationally acclaimed percussionist Gerald Cleaver, in collaboration with Larry Ochs, founder of the legendary Rova Saxophone Quartet. With the addition in 2015 of experimental guitar icon Nels Cline (who belatedly became a pop-guitar icon by joining Wilco) the trio’s lineup was complete.

NELS CLINE might be as close as the modern avant-garde gets to a household name. Before joining indie rock institution Wilco in 2004, Cline divided his energy between improvised contexts alongside Julius Hemphill, Vinny Golia, and brother Alex, and more song-oriented settings like Carla Bozulich’s alt-country outfit Geraldine Fibbers and Mike Watt’s Crew of the Flying Saucer. Cline continues to occupy the narrow space between pure sound and song, as exemplified by his longstanding Singers trio with drummer Scott Amendola and bassist Trevor Dunn, and his recent duo with guitar prodigy Julian Lage.

In his own words, Detroit-bred, New York-based GERALD CLEAVER’s multifaceted approach to the drum set balances “static sound and extreme dynamics, melodicism within heavy texture, deep-rooted groove, unchained abandon, and the power and revelation of recurring form.” Cleaver made a name for himself through enduring partnerships with Vision Fest regulars like Roscoe Mitchell and Charles Gayle, but lately critics have been abuzz about his new musique concrète-cum-free rock quintet Black Host with Darius Jones, Cooper-Moore, Brandon Seabrook, and Pascal Niggenkemper. Pitchfork’s Hank Shteamer described 2013’s Life in the Sugar Candle Mines as, “a well-tended hot-house: feverish and bracingly weird, yet also purposeful and shrewdly strategic.”

LARRY OCHS is best known as a founder of the Rova Sax Quartet, a San Francisco institution that pioneered the application of improvisational strategies within the context of contemporary composition, beginning in the late 1970s and continuing right up to the present day: 40 years old in 2018. Equally inspired by modernist 20th century composition and the more worldly, abrasive strands of 60s free jazz, Rova and Ochs became widely celebrated for the lengths they would go to stretch the performance parameters of notated music through early collaborations with Henry Kaiser, Fred Frith, and John Zorn. Ochs connection with Cline began in the late 1990’s and culminated with the Celestial Septet, a septet comprised of both the Rova Sax Quartet and the Nels Cline Singers, with a fantastic CD release including a long, ecstatic Ochs composition and tours from 2009 – 2011. Ochs and Cleaver have performed off and on as a duo since 2013; a duo CD release (coming in 2018) – a beautiful , haunting set of music called “Songs of the Wild Cave” – will document their 2016 live recording made inside a secret cave in the Dordogne area of France; a cave that contains upwards of 150 Pleistocene-era paintings. It’s a unique recording in which the cave itself seriously influenced the music, becoming essentially the third member of a trio.