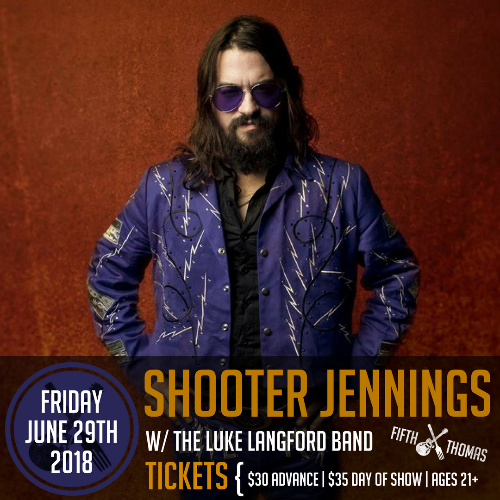 COW HAUS PRODUCTIONS AND FIFTH & THOMAS PRESENT: SHOOTER JENNINGS returns to Tallahassee in support of his latest album, “Countach”, on Black Country Rock Records, along with support from LISA BOUCHELLE (solo acoustic) & the LUKE LANGFORD BAND (acoustic). This is a show not to be missed in a great, intimate room!

The only son of country legends Waylon Jennings and Jessi Colter, Shooter Jennings literally spent his childhood on a tour bus. Born Waylon Albright Jennings, Shooter was playing drums by the time he was five years old and had already begun taking piano lessons, only to break them off and follow his own path to an understanding of the instrument. He discovered guitar at 14 and rock & roll (particularly Southern rock and the loose-limbed hard rock of Guns N’ Roses) at 16. Soon he moved from Nashville to L.A., where he assembled a rock band called Stargunn.

In early 2011, Jennings and blogger Adam Sheets came up with the idea of creating XXX, a new radio format that would focus on insurgent country, rock, and hybrids of both, from new and established artists, that fell far outside the narrow conceits of mainstream radio and were thus ignored. It gained traction, and a channel on Sirius/XM where both men served as program hosts. Jennings also moved to New York City with De Matteo. He and pianist Erik Deutsch formed a new band called the Triple Crown, and he became a father for the second time in April, to Waylon Albert “Blackjack” Jennings.

In urgent fashion, Jennings and the Triple Crown began recording; they released the video/download-only single “Outlaw You,” his screed against the country music establishment. It reached the top spot on CMT’s daily audience request competition and stayed there until a dispute with his former label dictated it be removed. The first official single from the forthcoming album, “The Deed and the Dollar,” again reached the top spot in the daily CMT request competition. Jennings’ fifth album, Family Man, followed soon after in March of 2012 — minus “Outlaw You.”

His next album, The Other Life, was released a year later on his own Black Country Rock label; it featured guest appearances from Patty Griffin, Scott H. Biram, and Jim Dandy of Black Oak Arkansas. The Other Live, Jennings’ second live album, recorded during his 2013 tour and featuring many of the songs from The Other Life, appeared early in 2014, again from Black Country Rock. In 2013, BCR also released an EP in which Jennings performed a dark and atmospheric reworking of “You Are My Sunshine” with Jamey Johnson and former Marilyn Manson guitarist Twiggy Ramirez that was originally recorded for the television series Sons of Anarchy. 2014 saw the release of an EP, Don’t Wait Up (For George), a tribute to his longtime friend George Jones.

Tickets are $30 in advance and $35 the day of the show, before tax and fees. No refunds or exchanges of ticket purchases.

Advance tickets will also be on sale with NO FEES at Finnegan’s Wake Irish Pub.

Welcome to the New MyNorthTickets!

We’re excited to bring you a brand new experience on MyNorthTickets. We’ve added new features, updated our design and have made the site intuitive and easy to use. If you have any questions, comments or feedback, visit our contact page. We would love to hear from you!